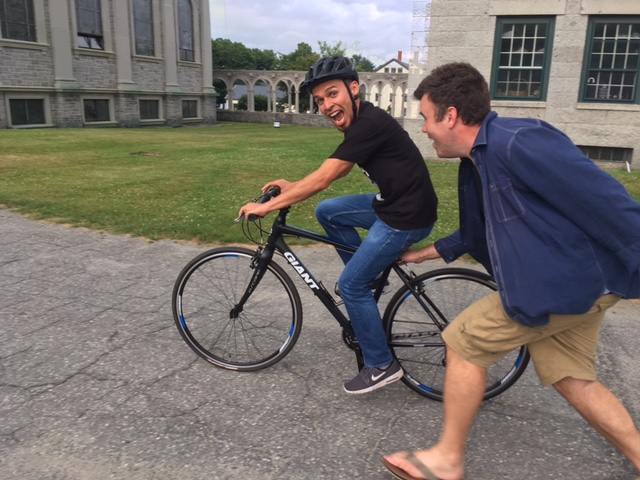 Summer has been wonderful. Traveling, teaching, writing. My wife and I are building a home; I feel lucky. Not everything has been smooth though, and one incident in particular bummed me out.

I WAS PULLED OVER AND SEARCHED FOR DRUGS.
My last name is pronounced Tre-vee-NYO. Yes, like with an Ñ. I’m Mexican-American. I get my name from my dad, but the Mexican comes from my mom. She was born and raised in Mexico, in a small border town called Reynosa. She had a tough life growing up and her family had little money. She didn’t get to go to college, so me going was extra special. As a young teenager, she got a job at a souvenir shop to help her family, and to buy books. She’s the smartest person in our family, and it’s not even close. She’s now a US citizen and is proud of it, and I’m proud of her.

She taught me something when I was younger, about the police. She said, “If you ever get pulled over, put both hands on the steering wheel so the cops can see you.” In other words: “Make sure they know you don’t have a gun. Make sure they know you are not a threat.” I was telling this to some of my white friends, who never recalled such conversations with their mothers…

Anyway, a couple of weeks ago, I was pulled over while driving in New Jersey, for a “sudden turn”. Two officers approached my car, one on each side shining flashlights into the car. I had both hands on the wheel, just like my mom taught me.

They didn’t believe my story, that I was a musician traveling from NY to a music studio in NJ, that I had flown in days earlier for a gig in Corning, NY, and that my rental car was rented using my band’s company credit card. I even presented them with the rental car paperwork.

“You’re going to a music studio in Montague, NJ? Seems weird to us.”

“Do you even make money doing this music thing?”

“Your story is just not adding up.”

After much discussion, they asked me to get out of the car, and then asked to search my car for drugs. I said, “Go for it.”

They searched the car up and down, removing seats, searching the glove box… Of course they found nothing. I stayed cool, but damn I was worried. Not because I did something wrong, but because something wrong could happen to me.

30 minutes later, I’m still on the side of the road. My hands down by my side, my heart rate up, and I’m thinking about my mom and what she would tell me. “No sudden movements, no looking at your cell phone…No talking back.” Kind of sad, isn’t it?

They asked me where my car was rented. Since I didn’t rent it, I was honest. “I’m not sure, maybe Newark airport? Again, my bandmate rented it.” The officer quipped back. “It was rented in Pennsylvania!” A big voila moment for him.

I quipped back. “I didn’t rent the car, so I wouldn’t know. But my band’s studio is minutes away from Pennsylvania, so that makes sense to me.” A big voila moment for me 🙂

Finally, they realize that I’m not a threat, that I’m not smuggling drugs from Mexico, that I’m just a musician with brown skin trying to get to where I need to go.

They let me go with no ticket and this explanation: “You took a sudden turn, and then your story wasn’t adding up. That’s why we stopped and searched you.” I simply said, “OK”, got in my car and drove away, both hands on the steering wheel.

AND NOW FOR POSITIVE THINGS!

CHOSEN VALE
If being searched for drugs was the worst thing that happened to me this summer, Chosen Vale was the best thing! Doug Perkins and Amy Garapic are king and queen of summer camps (sorry, seminars). They know how to do it. The atmosphere, the good vibes, the sense of community. It really is a Shared Space at Chosen Vale. See what I did there?! It was beautiful. I highly recommend it to anyone looking for summer enrichment. I was enriched. And I LEARNED TO RIDE A BIKE! You read that right! Here are some photos, and a hilarious video:

Amy G and Dougy P: Queen and King of summer.

ADIRONDACKS
Speaking of good vibes, a big thank you to my pals Aaron and Sarah Staebell for hosting us at their beautiful cabin in Rainbow Lake, NY. Love you guys.

ZILDJIAN FACTORY
CYMBALS. STEVE GADD PHOTOS. AMAZING. I was a guest at the Zildjian factory. I played cymbals all day and hand picked some Kerope and Avedis crashes and ride. But by far, the coolest thing was meeting Leon Chiappini, head cymbal tester. Leon has been working at Zildjian since 1961 and has played and tested over 9 MILLION cymbals. He was gracious in sharing his time and insights with me, and some funny stories too. No photo with Leon, so google him and his story. He’s great.

NEW COMPOSITIONS IN THE WORKS
I’ve been writing a lot this summer. Here are some things I’ve been working on:

Space Junk for percussion quartet + narrator. I wrote a children’s story, and set it to music. My buddy Mike Turzanski is illustrating the book. It’s a thing now, as he has started drawing. See below <3  This piece is commissioned by Lagan Percussion out of Waco, TX.

Float Like a Butterfly for solo marimba. This one was written in memory of Muhammad Ali, who demonstrated such amazing social activism during the 60’s and 70’s. One of my favorite athletes and social figures, ever. This piece is commissioned by Mark Boseman for his new marimba technique book, which will be available at PASIC 2016.

The Bird That’s Flown Into My Room. for cello and percussion quartet. I wrote this for my friend Meta Weiss of Queensland Conservatorium. She is good at the cello!

Untitled saxophone solo. I used to be a sax player. Excited about this one.

Texas PML: some of my solos and ensemble pieces were added to the TX Prescribed Music List! Really grateful for that.

I also arranged some of my music for an upcoming documentary called New Chefs on the Block. I’m a foodie and am excited about this documentary. It should be out by the end of the year or early next year.

I’ve got a few more commissions coming up, and then I’m taking a break from commissions to focus on my own things.

AND FINALLY… WE ARE BUILDING A HOUSE!
Me and my wife are building a home, and it’s almost done! We move in in less than a month.

Let there be light.
Happy summer everyone.

7 thoughts on “Searched for Drugs, Riding a Bike, and more Summer 2016”