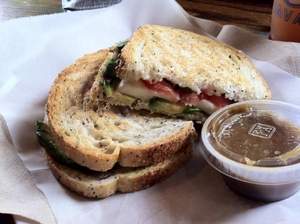 Three years ago, I made sandwiches. For money. That was my job. It was 2010, right after graduating from Eastman with my master’s degree, and right after my interview with NPR, where I said:

“if all else fails and I can’t find a job… I’ll just have to get a normal job for the first time in my life.”

Of course, I wanted to do music stuff to make money, but that doesn’t happen right away. “OK world! I have a degree! Give me money!” Not that easy.

So, I walked next door to Eastman and stopped in at Java’s Cafe, where I ate lunch nearly everyday as a student. Their sandwiches are that good. I asked if they were hiring. They weren’t, but the manager and I had developed a friendship over the years (because I was there EVERYDAY), and he said:

“We don’t have any barista openings, but we could use an extra person to make sandwiches. We can pay you our hourly rate, and you’ll get a free sandwich whenever you work.” I was sold! Like I said, those sandwiches are GOLD.

I was in charge of the tomato-basil-mozzarella sandwich, the Plain Jane chicken sandwich, and a few other “easy” sandwiches. The difficult sandwiches were left to my co-workers, who were WAY faster at making sandwiches; my music skills didn’t translate to sandwich skills… But, they kept me around anyway.

My days would consist of sandwich making in the mornings, and job hunting / composing music in the afternoons. At that time, I shared an apartment with my girlfriend, now wife Amanda. I remember her coming home from work and asking “How is the job hunt going?”. My response: “I can’t find a job. Also, I started writing a marimba duo.”

I’m sure those are the last two things a potential future spouse wants to hear:

Thankfully, Amanda was supportive. She thought I could benefit from having a website that I could send along with my job inquiries. So, she helped me put a website together.

As the summer ended, I finished my marimba duo and called it Into the Air. I found a small teaching job at a local community music school and I respectfully bowed out of my sandwich making job, which I was tremendously gracious for. (For the record, I STILL eat lunch at Java’s nearly everyday, and every now and then, I still get the employee perks too!)

At that point, I thought I should try and sell sheet music for Into the Air on my website, (to bring in extra money, but mostly to get my music out there).

I created a MIDI recording of the piece with Finale Print Music, (which honestly sounded like toy marimbas). I then created a PayPal account, a sheet music section on my website, and VOILA! I had a “sheet music store” (just one piece to sell, but still, it was something!)

Then, I sold a million copies overnight!!!

No one bought my piece, for months. It just sat there.

I was a little discouraged and thought about removing my sheet music store all together. But Amanda encouraged me to let it be. “It takes time” she would say. In the meantime, life was getting a little more settled. I was teaching, building up a studio, and writing more music (why not?).

I gave the piece to two dear friends (and fantastic percussionists), Mark Boseman and Chris Jones, who gave the world premiere of the piece in early March, 2011 at Eastman. Along with their great performance came a great recording, which I used to replace my toy piano MIDI sounds on my website. THANK YOU CHRIS & MARK.

And then, on March 21, 2011, something great happened. I got an email from PayPal saying:

I sold my FIRST score!!! I was SO STOKED!

I scurried to FedEx to make copies of the piece and shipped it out to Erik right away, along with an ever-so-thankful email.

This started an email thread, where Erik and I talked about my music. He was a student at Ohio University, and wanted to program the piece on a recital. Erik then asked if I was working on other stuff. So, I told him about some other projects I was working on, and we’ve been in touch ever since.

Fast forward to present day. I just returned from a three day residency at Ohio University, where I was a guest artist of the school of music. I gave clinics in music business, coached their percussion ensemble, and performed a joint concert of my music with the OU percussion studio. It was AWESOME!

My host was Roger Braun, a fantastic percussionist and the percussion professor at OU. Over a Jimmy John’s sandwich, Roger shared with me how OU came to find out about me and my music.

Erik had spread word around the OU percussion studio about my music, and soon other duos were ordering Into the Air, along with some of my other pieces, like Bloom for marimba quartet and some of my solo stuff.

Here’s the best part of this whole story. The first piece I programmed at my OU concert:

Into the Air. I played the piece with Erik Mullins. It was surreal and special. What a small, crazy, amazing world. THANK YOU ERIK.

In 2011, I sold exactly four copies of Into The Air. That’s all. FOUR. Anyone in the publishing business would tell you “THAT’S A TERRIBLE NUMBER”.

But, those four people have been instrumental in helping spread my music throughout the percussion world. I’ve already mentioned Erik. Here are the other three:

Gary Shuda was the next person to buy the piece. We also exchanged emails about my music, and on Dec. 6, 2011, Gary and his friend Ben Coleman gave me this:

Their video performance has been a HUGE discovery tool for Into the Air. I just searched for “marimba duet” on YouTube, and Gary’s video is one of the first things to come up. Crazy. So grateful. THANK YOU GARY.

Ben Andrews was the third person to buy the piece. Ben also gave me a great YouTube performance, and introduced my music to his teacher Phillip O’Banion. Phillip recently commissioned me to write a new multi-percussion solo. How did Phillip find out about my music? Through Ben. THANK YOU BEN.

The fourth person to buy the piece was Josh Spaulding, a student at University of Tennessee at Martin. Josh spread my music around his percussion studio, (they’ve programmed Into The Air, Bloom, Six, and 2+1), and sure enough, I’ll be an artist / composer in residence at his school next year, which includes the premiere of a new piece I’m writing for their wind ensemble. THANK YOU JOSH.

Into The Air was a major tipping point for my composing career. It’s been programmed hundreds of times all around the world and has become a standard in the percussion duo repertoire (that’s WEIRD to say, but I heard Michael Burritt say it once, so I’m gonna go with it.)

There have been other contributing factors for Into the Air, like this awesome video performance from Thomas Burritt and Joe Kelly, which has also been a HUGE discovery tool for the piece (THANK YOU TOM & JOE). The piece has been regularly performed by Amphion Percussion Duo and Escape X Percussion Duo (THANK YOU SEAN, PETE, ANNIE & ANDREA). I’ve gone on to record the piece with Michael Burritt. (THANK YOU MIKE) and Mike and Tom Burritt performed the piece last year at the Percussive Arts Society International Convention too.

I’m off. That Java’s sandwich is calling my name.